In developing countries, the accessibility to prosthetic devices is low due to the limited healthcare conditions, a general lack of technical knowledge and poorly equipped workshops. The introduction of 3D printing technologies has permitted new cheap and personalized hand prosthetic designs by bypassing many of the current manufacturing limitations of traditional prostheses. Although innovative and accepted in different settings around the world, these active 3D printed prostheses still require extra parts and assembly steps, thus reducing the overall accessibility. We have developed the first functional non-assembly prosthetic hand fabricated with the material extrusion technology; the most accessible 3D printing technique. The process is reduced to a single printing job and an extra step of support material removal. No extra parts, materials or complex assembly steps are required.

During the design process, we have also adopted ten design guidelines that led to a successful working mechanism, we encourage future designers with 3D printing to follow our non-assembly approach. 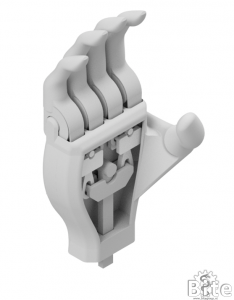 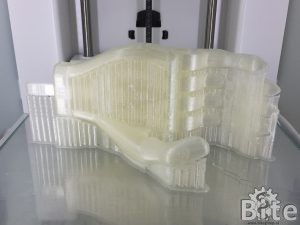 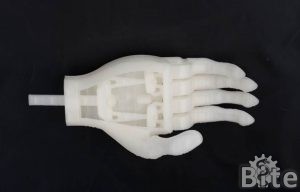 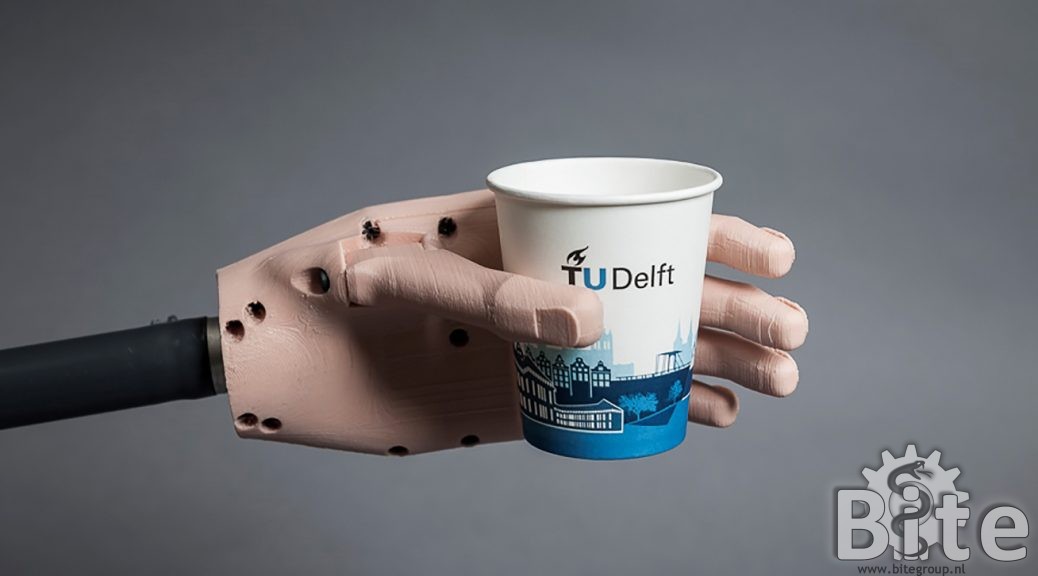 The FA3D hand is a 3D printed Hand printed with a flexible filament. The fingers of the hand have multiple joints, allowing for adaptive gripping. The fingers have elastic joints and can be printed as one part. Therefore assembly of the finger phalanxes is not necessary.

Due to its adaptive gripping, the FA3D Hand can hold a broad range of objects.

The FA3D Hand consists of 8 3D-printed parts. The parts can be  connected with standard bolts and nuts. Steel cables are used to actuate the fingers.

The hand is body powered. It can be controlled by pulling the control cable, by using a shoulder strap.

Background
Replacement of a missing hand by an artificial alternative remains one of the biggest challenges in rehabilitation. Although many different terminal devices are available, around 27% of the amputees does not actively use their device and 20% totally refrains from wearing it. There are various reasons for prosthesis abandonment, e.g. wearing discomfort (too heavy, too hot), too little added functionality, difficult or tiring to use, lack of sensory feedback. User studies identified multiple aspects of the prostheses that need improvement, in order to meet the user demands. Mass reduction was identified as the most important design priority.

Goal
The goal of this project is to design and test a new lightweight and efficient body-powered hand prosthesis with articulating fingers. A low mass will increase wearing comfort. Mechanical efficiency will decrease the required actuation force, which will lead to an increased control comfort. It will also enable the hand to produce a higher pinch force, which will increase the functionality of the hand. The articulating fingers of the hand will enable both power and pinch grip. This enables the grasping and holding of a broad range of different objects and enhances natural cosmesis.

The Delft Cylinder Hand appeared in the corporate movie of the Delft University. Click the video below.

Delft Cylinder Hand
During this project a new prosthetic hand prototype was developed, the Delft Cylinder Hand. It has under-actuated articulating fingers which adapt to the grasped object. It has voluntary closing body-powered control and it has a hydraulic cylinder transmission. The hand was subjected to various mechanical and functional tests. Through the application of a hydraulic transmission, the hand requires 49-162% less energy from
the user when compared to commercially available body-powered hands and it has a higher maximum pinch force (30-60 N). In functional tests the hand scored similar to current myoelectric hands. Yet its mass (152 gram without glove; 217 gram with
glove) is 68% lower than the lightest available articulating myoelectric hand and 55% less than the lightest body-powered hand of similar size. Functional tests showed that The ‘Delft Cylinder hand’ provides the amputee with a level of function that is at
least comparably to contemporary hands, at a cost (mass and actuation effort) which is much lower than that of all currently available hands.

Adaptive grasping
The Delft Cylinder Hand was developed to enable natural grasping of small and large objects. The hand can perform fine pinch grasp, as well as cylindrical power grasp, required to pick up a suitcase.

The following video shows some examples:

The Delft Cylinder Hand has articulating fingers and is anthropomorphic, slender, fast, efficient and silent. The hand mass is much lower than the lightest commercially available hand. The hand therefore meets one of the most important user demands in
upper limb prosthetics, which is a low hand mass. The hand can pinch harder (>30 N) at a lower user effort.

Watch the TEDxTalk on the Delft Cylinder Hand